When you work at a larger company, there is always a birthday, promotion, wedding, or baby to celebrate. And once you’ve shown off your baking skills, well…  let’s just say there’s an expectation.

I really don’t mind. I like to play in the kitchen, and it gives me a vehicle for experimenting and sharing. Plus, I work with a lot of genuinely nice people, and it’s fun to be part of whatever they’re celebrating.

Last week, a friend from work celebrated the big 3-0, and I had offered to bring in anything he wanted. At first, he had just one requirement: no carrots, coconut or nuts. “They form my Axis of Evil when it comes to baked goods,” he explained.

But a few days later, he mentioned how much he loved Funfetti. And really, who doesn’t? 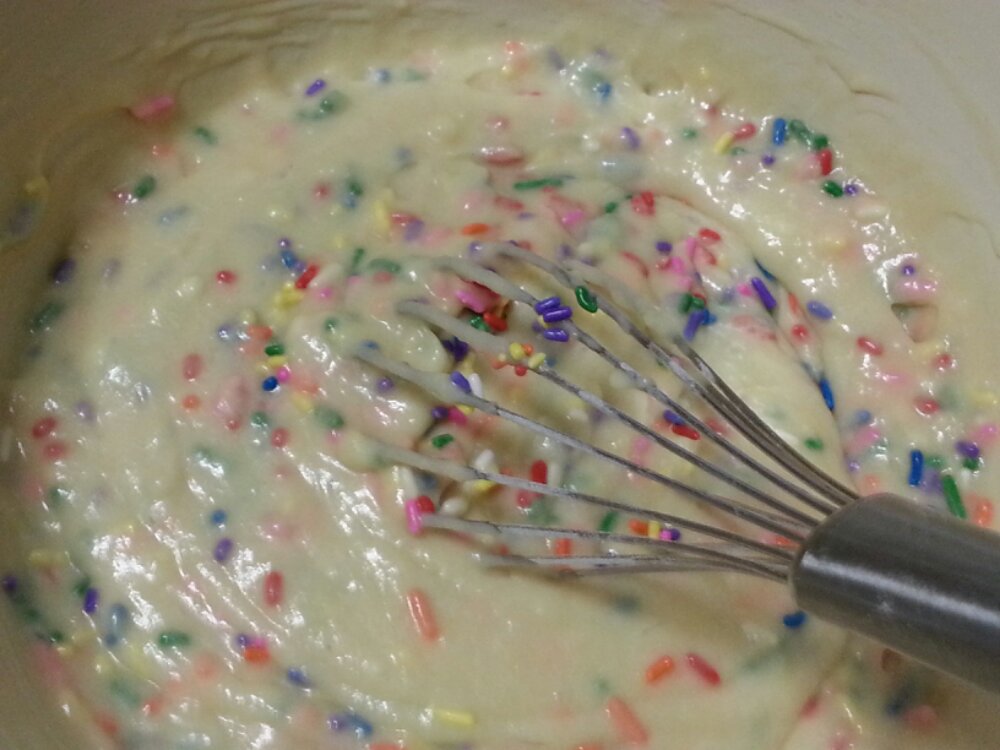 White cake from a box is one taste and texture I’ve never quite been able to replicate. This recipe doesn’t change that, but it does have a great flavor and texture of its own.

And it turns out the confetti color is easier to duplicate than I thought: 1/3 to 1/2 cup of sprinkles per dozen cupcakes, gently folded in. As a topping, I prefer nonpareils (the tiny little balls), but in batter, the regular sprinkles won’t bleed as much. 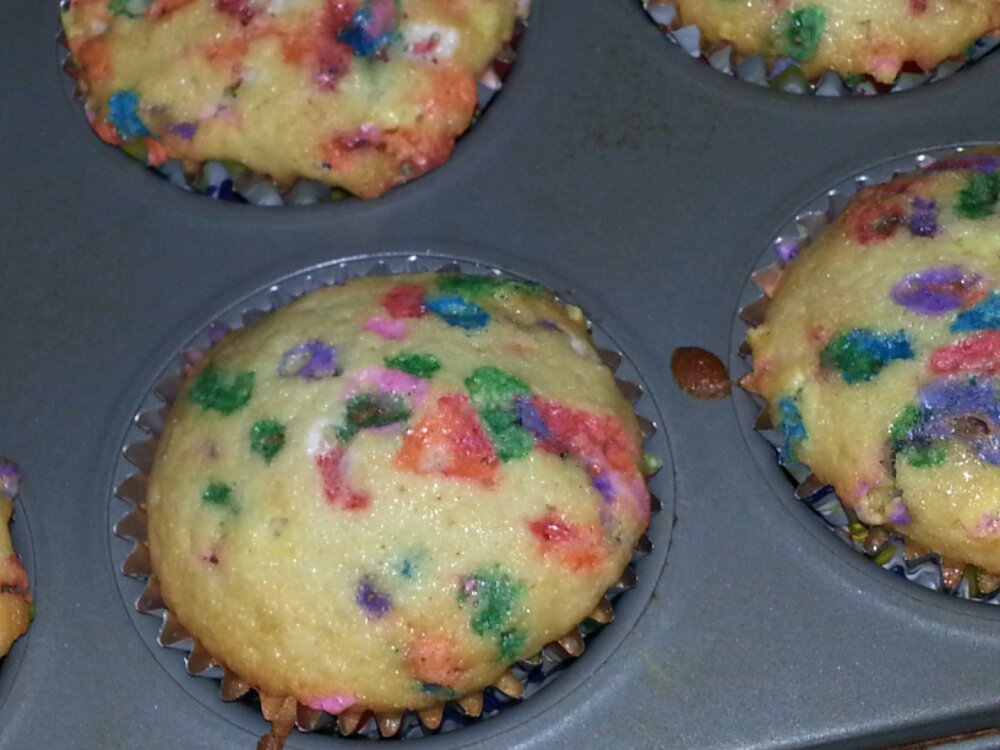 I also loved how quickly this recipe came together, and the fact that it was a small batch. I was on the road for work a couple days, and this was a cinch to pull together after work.

I cut the frosting recipe in half and still had more than I needed, while allowing the cake to take center stage. 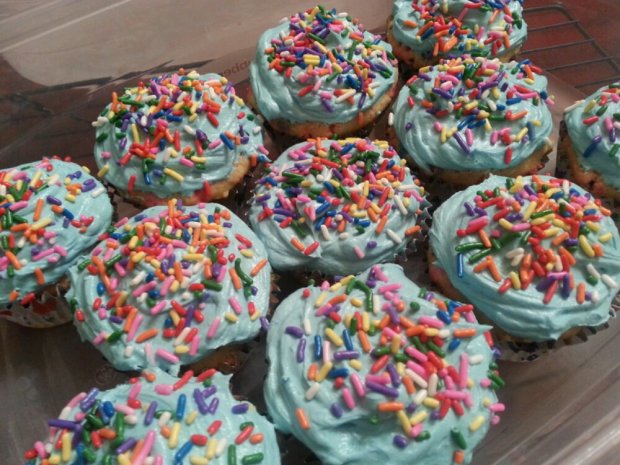 I dropped off 10 cupcakes in my friend’s office around 11. At 1pm, he brought back the container. “I ate 3 for lunch. And then I had to give away the rest so I wouldn’t eat them all.” 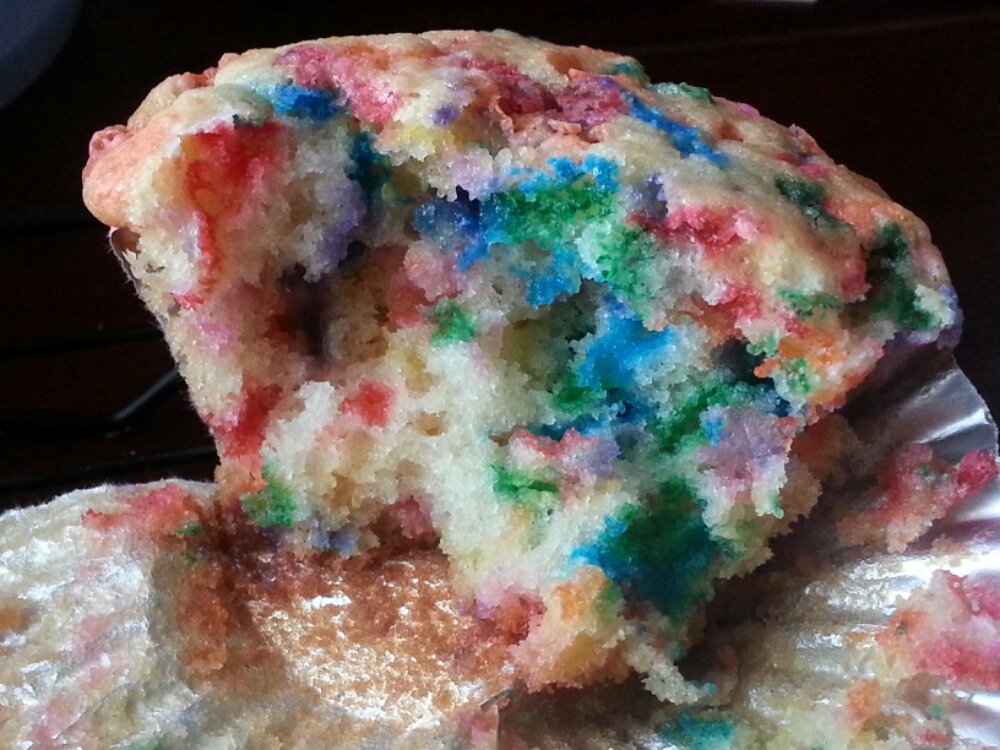 In a medium bowl, mix together flour, baking powder, baking soda, and salt. Set aside.In a large bowl, combine melted butter and sugar. Chill to room temperature. Stir in egg, sour cream, milk, and vanilla extract until combined. Slowly mix in dry ingredients until no lumps remain. Batter will be thick. Fold in sprinkles, being careful not to overmix.

Divide batter among 12 cupcake liners and bake for 20 minutes or until a toothpick inserted in the center comes out clean. Cool completely.

Beat softened butter on medium speed with an electric mixer until smooth and creamy, about 3 minutes. Add powdered sugar, cream, vanilla and salt with the mixer running. Increase to high speed and beat for 3 minutes. Add more powdered sugar if frosting is too thin or more cream if mixture is too thick. Stir in food coloring if desired. Frost cooled cupcakes and top with sprinkles. Make ahead: store in an airtight container in the refrigerator for up to 3 days.

In search of flavor

Self confessed kiwi fitness fanatic blogs about his random musings...

brunch and the city